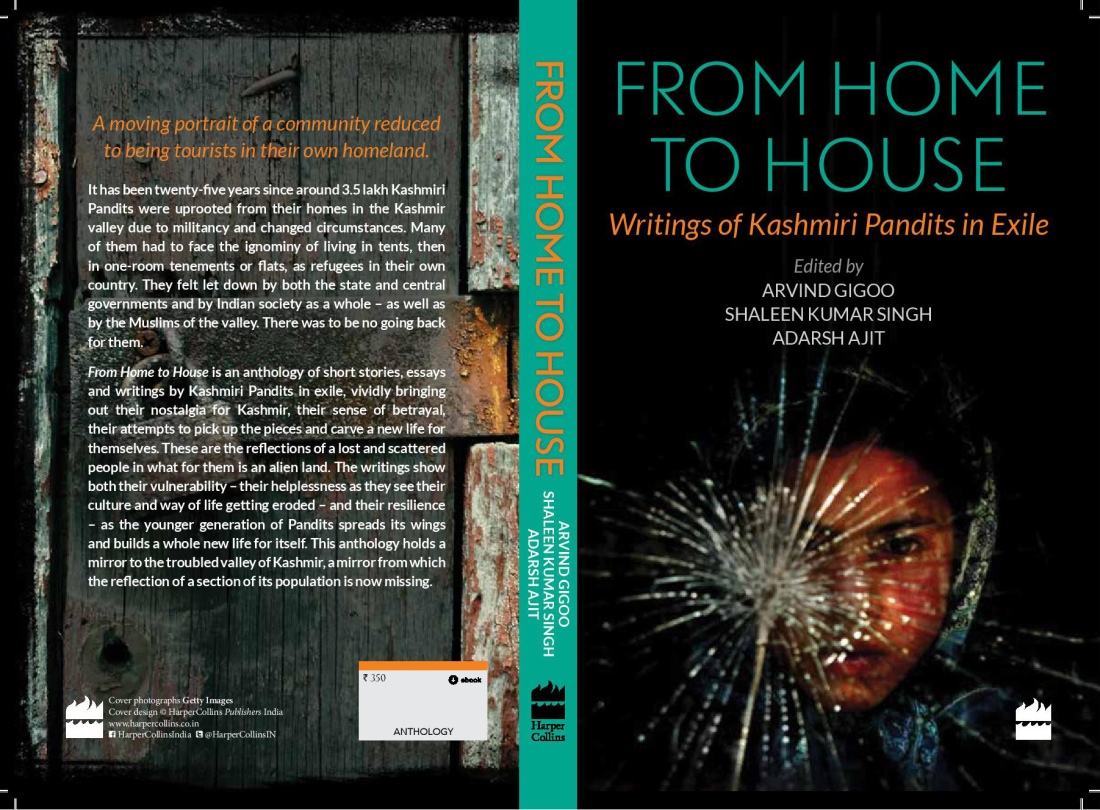 From Home to House: Writings of Kashmiri Pandits in Exile is a disturbing anthology. The beginning of the insurgency led to an exodus of 3.5 lakh Pandits from Kashmir to Jammu, Delhi and various other parts of India, following murder, plunder and threats of even greater devastation. The few who remained, lingered under the shadow of death and some even succumbed to other massacres, such as the one that took place in Nadimarg in 2003. And even those who escaped the massacres often found themselves subjected to a traumatic experience of physical and psychological trauma in those makeshift tents or one-room tenements that the refugees were often forced to subsist in. The short stories and fictional excerpts contained in the anthology plunge the readers into this cauldron of hate, betrayal and trauma, tinged with a fruitless nostalgia that not only lacerates the conscience but raises unanswerable questions regarding the Indian polity in general and the Kashmir imbroglio in particular.

One of the recurring tropes is that of neighbours and friends and even students (many Kashmiri Pandits were teachers) suddenly turning into enemies – a trope that one also witnesses in partition narratives from both sides of India. Hence the emergence of oxymoronic epithets like “kaafir-friend”, a term used by a former friend turned abductor in M.K. Santoshi’s ‘The Kidnapping’. Likewise, in ‘Under the Shadow of Militancy’ it is an educated young Pir, “who was at one time, his best student”, that proclaimed “The Muslims have no obligation towards them. However, they can rely on our generosity, avail of our tahafuz (protection) and live like second class citizens. That is their only hope” (72). Similarly, in response to questions about why the local Muslims did not help or intervene, the survivor of a massacre can only mutter:

“I was not there, but if they did not hear the death cries or the barrage of bullets, they must have all turned deaf at the same time. If they heard, they must have shut off their ears and watched from behind the curtains, for no one appeared on the scene till after the dust and the smoke had settled down and the blood dried up and there was the silence of the dead.” (‘The Survivor’, 45)

Quite naturally, the experience of such betrayal, mistrust and hatred are bound to generate competing fundamentalist assertions, such as those voiced by protesting associations of Kashmiri Pandits, demanding administrative redress: “Bharat mein rehena hoga, ram raam kehna hoga. Jis Kashmir ko khoon se seencha who Kashmir hamara hai. Khoon ka badla khoon (92).” Faced with such representation of mutual antagonism, one is again forced to contemplate the liminal nature of the “internally marked” nation-space where, as Bhabha points out “the discourse of minorities, the heterogeneous histories of contending peoples, antagonistic authorities and tense locations of cultural difference” jostle for space (Location of Culture 148).

The reasons for such tension and the antagonism become palpable as we encounter several descriptions of the kind of horror which the Kashmiri Pandits have had to endure, either on account of the massacres they had to survive or the sheer misery of life in the refugee camps which awaited them after their exodus from Kashmir. The anthology is remarkable for its documentation of such trauma which becomes vividly communicated through several passages. Consider for example, Satish Bhat’s narration of the massacre in his village, in which he lost several family members:

“I went through the most excruciating exercise of my life to identify my kin among the blood-splattered bodies with torn parts and mangled faces. Even the gender was not easy to determine on some of the dead. There were two small shrouded figures at one end of the line and I knew they were our children. I rushed to that side and gently removed the shroud from one to find Sonu, my elder son. His chest was sieve from the holes the bullets had made; his entrails had come out from the open wounds in his abdomen. The face wore a mangled expression that has haunted me ever since.” (39)

Similarly haunting is the description by Pamposh of life in the refugee camps which exhibits a stark state of dehumanizing degeneration:

“I lead the life of a centipede; I crawl. All around the camp, there is stench of human excrement and waste. People wake up in the morning, hungry and muddled. The awakenings are pallid. The water in the water tanker smells foul, and children lie whole day in their own vomit…During the day we hide from the blazing sun. At night we live from one insect bite to another. Centipedes, millipedes and spiders are our companions. We must learn how to live with them.” (The Garden of Solitude 81)

Like Eliot’s ‘Gerontion’ the readers may well ask, “After such knowledge, what forgiveness?”

Yet, even in the middle of such nightmarish trauma, the narratives continue to record glimpses of those incantations of sanity that have always emerged from narratives of horror that have lacerated the subcontinent all too often. Satish Bhat recalls the kindness of Mohammad Jamal, the tailor of Nadimarg who sheltered him on the night of the massacre; Sunil recalls the message of amity and solidarity from Sonjahoo before the fundamentalist assertions of the young Pir, Omkarnath recalls the affections of Asad and Yaseen and an old man cries out from the stairs of a mosque:

But such plaintive voices are necessarily lost in the din of violent slogans and the sounds of bombs and bullets. What we are left with is only a sense of profound loss regarding the vanishing traces of a syncretic culture now drowned in rivers of blood.