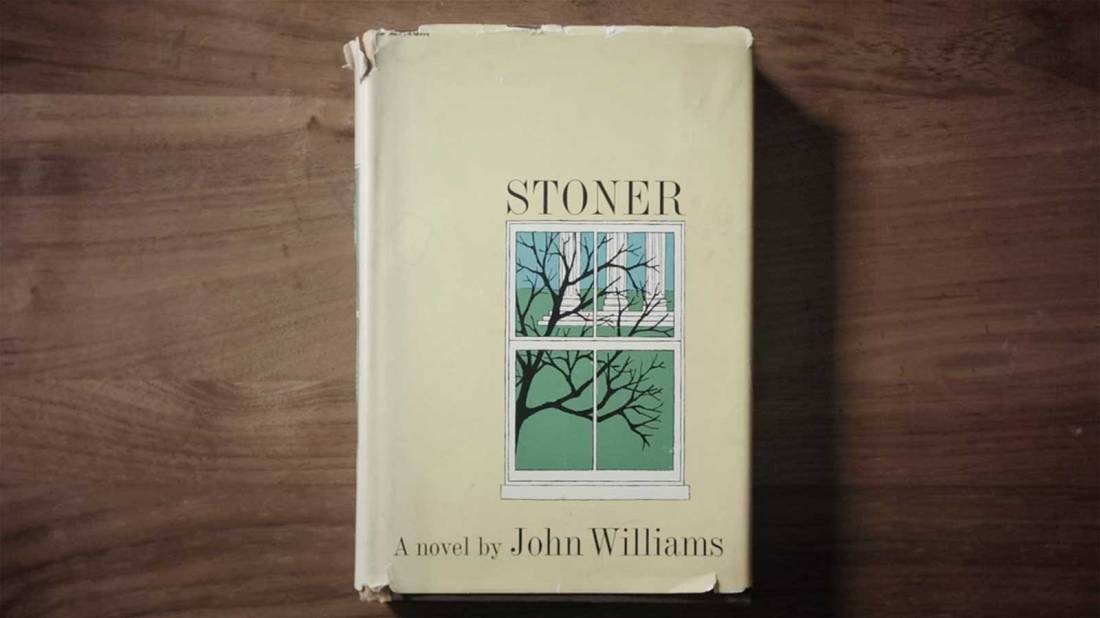 John Williams’ ‘academic’ novel Stoner John William’s novel Stoner, first published in 1965 and adjudged as Waterstones’ Book of the Year in Britain in 2012, follows the uneventful and unglamorous life events of an academic in Missouri in what could be termed as a rather prosaic narrative. The matter-of-fact demeanour is completely unglamorous, lacking the experimental pyrotechnics of postmodernist masters like Calvino, Dellilo, or Pynchon. The narrative settles instead, upon a rhetoric of forceful simplicity which seems rooted in the humble origins of the protagonist William Stoner. His parents are agriculturalists, dedicated to the  soil that provided them with a livelihood, abstentious and mute through the entire course of the narrative. It is possible to picture them as the stock characters in Van Gogh’s paintings of rural landscapes – figures affirming a certain way of life while adding little to life itself. Stoner, too, is an ungainly, unremarkable character portrayed as a lad with stooping shoulders by the age of seventeen and bound to his household by the “necessity of toil” required on his parents’ small farm in Booneville.  How these luck luster characters might possibly retain a reader’s interest is open to question.

The earliest unsettling of experiences occurs when Stoner switches his career from the course on agriculture, taken up at the advise of his parents, to one in literature influenced by his mentor Arthur Sloane. Where he replicated the systematic approach of a toiling farm hand in his agriculture course, Stoner found that Sloane’s class called for a symbolic engagement with words whose meaning eluded him in literal, unimaginative exercise. The transformative potential of literature which prompts Stoner’s decision to pursue teaching as a career is largely autobiographical. It is also, as Sloane cheerfully contends in the novel, an outcome of ‘love…simple as that.’    As the characters go on to elucidate the novelist’s ideas regarding the university and the discipline of literature, the novel becomes  a crucial read for any scholar/lover of literature and the humanities.

One of the characters whose masterly insights build up to the notable definition of the university is Dave Masters, Stoner’s friend since his student days. Locating Stoner, Gordon Finch and himself within the academia, Masters contributes towards the identification of the university as a hovel for the “dispossessed of the world” who maintain their pretence to protect its institutionalization as a site of selfless pursuit of knowledge, akin to that of the Church in the Middle Ages. Dave later dies in the War but his predictions hold true for the most part of Stoner’s life. Stoner’s dispossession is double-fold within the institutions of the university and marriage – his colleague, Hollis Lomax employed after Sloane’s death  curtails his freedom in the professional arena while his wife, Edith embittered by  a non-rapport with her husband practices the same within the domestic sphere. Attempting to assert their supremacy over Stoner, Edith and Lomax both use well-loved subjects – Grace, her daughter with Stoner and Walker, an arrogant and inept student – as pawns.   Lomax’s professional rivalry with Stoner ultimately benefits Walker, as Lomax, in his capacity as the Chairman overlooks Walker’s incompetence to overrule Stoner’s staunch opposition to his admission in the graduate programme.   Edith’s exploitative tactics however are more harmful—the conflict between her parents necessitates the sacrifice of Grace’s scholarly aptitude in favour of the life of a socialite. Unsuited as she is to such a lifestyle, she is in turn lead astray.

Stoner in turn sacrifices what could have been an enduring bond with his daughter in face of his wife’s maneuverings and reconciles with the compromising teaching schedule assigned to him by Lomax. His character is marked by  resilience without  retaliation- while the readers are left exasperated with his unwilling compliance to what proves detrimental for himself and his daughter- his love for literature proves by far the most enduring. His “sense of a job”, emphasized upon by Williams, sustains and renews his scholarly vigor  in the midst of what he views as distractions, rather than challenges, that fall like a shadow between his love for the subject and the perfection of his articulation of it in his lectures.

Amidst the political turmoil of civilizational crises that stormed outside the University and resonated in Stoner’s life, he is informed by his “cautious faith” in the institution of the university and armed with a scholarly defense of impassivity like the Latin translation he hurled at his colleagues approaching for a meeting: “Begone, begone you bloody whore son Gauls.” Williams asserts that what appears to be an unsuccessful life for Stoner, both professionally and personally, is barely a ‘bad’ life since he retains the tradition of faith- a tradition, which according to Williams, sustains civilization. While these idealistic notions would prove incompatible with the current scenario of corporatization of education where Stoner’s retirement as an Assistant professor after all the years he devoted at the institution would be judged as largely unproductive, Williams’ perception of literature would be considered equally naive. In the Introduction to Stoner, Williams mentions his dissatisfaction with the changes in the method of  teaching literature in the Universities  where the text is approached as something to be “studied and understood rather than experienced“. His relegation of “reading without joy” to stupidity—one  from which Stoner is exempt– while ill-suited within the paradigms of post-humanism, is hardly to be disavowed in the revival of the richness of intellectual life which is losing to the rush of curricula discipline within the university.  One is left pondering whether the revived interest in the novel owes much to the designing of time-constrained courses at universities globally with little regard for the differences of infrastructure, which neither allow lengthy meditations on a text nor for it to be discussed at length, encouraging and inviting the kind of imaginative response which comes with greater reflection. Lacking inspiration and failing the transformative potential of literature, such courses merely culminate in undue stress for instructors and students alike who fail to do justice to teaching, learning and/or researching.