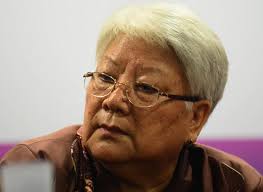 So I told stories

As my racial responsibility

To instil in the young

The art of perpetuating

To be passed on to the next generation.

“The Old Storyteller” (Songs from the Other Life)

The history of Nagaland is steeped in more than half a century of bloodshed, war, death and trauma. While the rest of the India celebrated independence, the Nagas sought their own freedom. What followed were decades of strife, guerilla warfare, displacement and dispossession, and a cycle of events that, in Ao’s own words, “re-structured or even ‘revolutionized’ the Naga psyche” (These Hills x). Temsula Ao’s collection of short stories, These Hills Called Home: Stories from a War Zone (2006), set against the turbulent backdrop of such a cataclysmic upheaval, is written with the purpose of passing down “existential history and essential tradition” “on to the next generation” so as to “make sense of the impact left by the struggle” on Naga lives (Ao, These Hills xi).

Stories, for Ao, are the only means to hold on to one’s history, territory, ethnicity and identity. She writes in “The Old Storyteller”,

Grandfather constantly warned
That forgetting the stories
Would be catastrophic
We would lose our history,
Territory, and most certainly
Our intrinsic identity.     (Songs)

True to her words, the stories of These Hills are treasure boxes that houses slices of Naga life, away from the headlines of press. Easterine Iralu in her 2004 article, “The Conflict of Nagaland: Through A Poet’s Eyes”, comments, “Let media stop defining the NE by the conflicts going on there. Let media focus on ordinary people and their lives. Let exoticisation of the NE stop.” Ao’s stories are an attempt to bring to the world the lives of ordinary Naga people caught in a spiral of violence. Describing how common people cope with violence, how they negotiate power and force, how they face the destruction of death only to reconstruct life amidst the ruins, the author details a way of life under threat from the forces of modernisation and war. Ao uses the memories of the turbulent years to construct, through the day-to-day life-stories of ordinary people, a repository of cultural narratives that conserves within its core the collective identities of the Naga clan, some of which remained unaffected by the events while some transformed beyond recognition.

Ao’s titles are often deliberately misleading to make the tragedies more poignant. The protagonist of “Soaba” is not the eponymous character but the backdrop against which the death of Soaba takes place. The backdrop, not surprisingly, is a haunting reiteration of the traumatic events that the subcontinent had already witnessed in its struggle for independence. Within their own state the Nagas suddenly find themselves “internally exiled”- alienated and banished from their roots and land of origins, denied access to fields, and restricted in their routine activities. Needless to say, “the intense physical and mental torture” of such forced migration claimed many a lives” (Ao, These Hills 11). The political conflict also creates a new group of Naga people who becomes the “extra arms” of the Indian army, supplying them with confidential reports on the underground rebels and getting equipped in the process with vehicles, guns, free rations of rum and unlimited power over their own tribe, which eventually claims numerous lives like that of Soaba. Stories such as “The Curfew Man” and “A New Chapter” capture a similar unrecognisable identity transformation of some Naga people which preys into the moral fabric of the society making friendship and loyalty its casualties. “The Jungle Major”, “The Last Song” and “The Night”, on the other hand, are stories of resistance, against oppression and hegemony. Khatila, the wife of the “jungle major”, sheds the role of an ordinary housewife and becomes an active participant in the separatist movement when, using her presence of mind, she manages to save her rebel husband from the handcuffs of the army. In aiding the jungle-major escape disguised as an ugly servant, Khatila saves the entire village from being ravaged by the army. “The Night” is the story of Imnala who, twice impregnated and abandoned both times by the rebel forces, accepts her unwed motherhood with proud defiance in a society where a child without a father is considered non-existent. Probably the most evocative and gripping tale of resistance is the story of Apenyo, who continues to sing as the state military rapes her to death. Singing her “last song” in her native language despite being ordered to stop is Apenyo’s cultural resistance to the hegemonic forces. “The Last Song” is also hauntingly reminiscent of the barbaric Jallianwala Bagh massacre, with the power position occupied by the Indian armed forces who open fire on a peaceful assembly of villagers giving them no opportunity to escape. Ao also reveals how during times of crisis, the native Naga traditions and customs often becomes the loom around which the common people weave their identity. In a time torn by violence, Sentila of “The Pot Maker” is able to recognise her self only by succeeding in making pots, the ancestral skill of her family. Her initial inability in mastering the native skill throws her into an abyss of confusion where failing to make sense of her life, she desperately clings onto her culture to face her existential crisis.

I hear the land cry,

Over and over again

‘Let all the dead awaken

And teach the living

The dead awakens in Ao’s stories through memories recollected across generations. As the grandfather of the story, “An Old Man Remembers”, recounts to his grandson the haunting memories of the unrest which caused him and his friend to kill five men and lose their youth, the readers realise why the older generations have a “racial responsibility” of narrating stories to the younger ones. It is because these stories enable them to face the truth – “Truth about the self, the land, and above all, the truth about history” (Ao, These Hills 112). Ao’s “stories from a war zone” are narratives of such truths. Narrating common lives impacted by the turbulent years of the Naga separatist movement, these stories preserve the history, the territory and the intrinsic identity of the community, “lest we forget” (Ao, These Hills ix).