Ritesh Batra’s Photograph is one of those movies that has managed to ask that one pertinent question, that the poets and playwrights have been asking for ages; The enigma, that romantic love is, has been put to question for the pragmatic eyes of the twenty first century’s audience. The yarn revolves around two characters who have been initiated into each other by sheer chance. Rafi alias Rafiullah (Nawazuddin Siddiqui) is a street photographer at India Gate and Miloni (Sanya Malhotra) is an aspiring chartered accountant. As the movie begins we see Rafi trying to charm his customers by saying “saalon baad jab aap yeh photo dekhenge, toh aapko aapke chehre peh ye dhoop dikhayi degi, Aap ke baalon mein yeh hawa aur aapke kaano mein hazaaron logonke awaazein. Sab chala jaayega ,hamesha ke liye sab chala jaayega”(years later when you look at this picture, you will be able to feel the same sun as you do now, the same wind that passes through your hair, the same humdrum of the city life will echo in your ears. This  moment will  most definitely perish but will forever be imprisoned in this photograph). Miloni on the other hand is seen as an industrious student who spends late nights burying her face amidst books. Her father is seen to be boastful of his younger daughter’s academic prowess. Miloni’s mother and elder sister seem to be making choices on her behalf as to which colour would suit her the most. Miloni complies with them in a manner which seems practiced. It is manifest that despite  having a mind of her own she has been denied to use it for a long time. On her way back from shopping Miloni comes across Rafi who tries to ensnare  another prospective customer by his poetic words . Miloni concedes and agrees to have a photograph taken. Rafi who is struggling to repay his father’s debt has been brought up by his grandmother (Farrukh Jaffar). This vivacious grandmother who appears later on the screen is determined to have her grandson married and settled. Rafi tries to put off the marriage by writing a letter to her, concocting a story of him being in love with a girl named Noorie and to make it believable, he sends the letter with a photograph of his last customer, that is Miloni. The eccentric grandmother decides to pay her grandson a visit hoping to meet the prospective bride. Now Rafi  sets out to find Miloni hoping that he could convince her to pose as his betrothed. Miloni quite surprisingly agrees. And they start meeting on a regular interval. They start sharing intimate details about  each other. Miloni, who doesn’t drink cola because of her sentimental attachment with Campa  Cola and her deceased grandfather , finds an unlikely friend in Rafi. Miloni who has long been out of practice of professing her thoughts gradually warms up to their domestic help . She  says she would love to visit her village. Rafi is constantly reminded of the societal dichotomy between him and Miloni. Meanwhile Miloni’s parents engage themselves in their daughter’s matchmaking. A business student with lucrative opportunities in America comes to meet Miloni. Miloni confesses she wishes to live in a village and work in a farm. Later she turns him down.

Rafi sets out on a fairytale-like adventure  to find Campa Cola for Miloni. He tracks down a Mr.Sodabottlewalah who had purchased the recipe from Campa when they went out of business. Rafi finally having found out what to give Miloni as a gift is left with a vacant face on the screen. Miloni too on a bus ride finds something. She finds her lost voice, she embraces herself as not wanting to be a Chartered Accountant. Photograph is also a story of the unbecoming of Miloni and becoming of Miloni. From being denied of a childhood dream of becoming an actor, to warding off the advancement of a possible predator posing as a harmless teacher(Jim Sarbh), Miloni starts to construct an identity of her own. Being the shrewd Dadi that she is, Rafi’s grandmother somehow deduces that Miloni is not of their religious belief and Noorie  not being her real name. Interestingly enough Dadi doesn’t come up with any religious protestations . Instead she encourages Rafi to find a home. Rafi , haunted by the ghost of a Tiwari(Vijay Raaz) who ostensibly hanged himself due to loneliness, makes up his mind on setting up a factory of Campa Cola. The very prospect of a Noorie gives rise to a struggle in Rafi to battle with man’s oldest enemy, loneliness. The obvious question that one ought to ask is of a philosophical sort. Can anybody dare to think that they can spend their life on Campa Cola? Campa  Cola being an obvious symbol for love. Will Miloni ever be able to leave behind her current life and pursue her juvenile dream of living in a village and possibly fall for Rafi? Or is it going to be another Telenapota Abiskar by Premendra Mitra? If someone is into art which is least didactic in nature and makes its audience ask questions, then Batra’s Photograph can definitely be given a chance.

Photograph can also be read as an ode to the romance of the earlier Bollywood. Rafi borrows the name Noorie from an old and typically romantic Yash Chopra movie by the same name. The song “tumne mujhe dekha”  from Teesri Manzil comes at the theatre scene, which also concludes the movie and fits in quite naturally. Two different Mumbai is vividly portrayed through the lens.

The background music successfully compliments the doleful longing of the central characters. The ending is deliberately left open for the audience to complete the story. Nawazuddin and Sanya have done justice to their roles. The cinematography by Tim Gillis and Ben kutchins helps the case the director is trying to make. 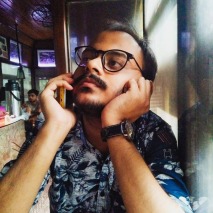 Rohan Datta is a Post Graduation student at Maulana Azad College. He takes food very seriously. He lives for the sake of eating and not the other way around. The rest about him is privy to very few people.